Enforceability of the Right to Food 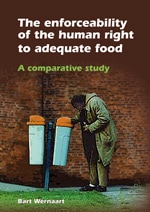 While the right to adequate food is often discussed in the context of developing countries, especially in situations where access to adequate food is a problem on a larger scale, this book focusses on the right to food in two Western countries in which theoretically the circumstances allow this right to be enjoyed by each individual. Through a legal comparative study, the enforceability of the right to food is compared between the Netherlands and Belgium in light of the current UN Human Rights system. There seems to be a difference between what the countries do, what they say they do, and what they should do on the matter. As it appears, the coincidental constitutional circumstances mainly determine the enforceability of the right to food, rather than the content of the human right in itself.
This book includes a thorough analysis of suitable comparative legal methodology and the embedment of the right to food in the UN human right system. Furthermore, for both countries, an in-depth analysis of the case law on the right to food (mostly concerning the status of foreigners), the constitutional context in which the Judiciary operates, and the relevant UN reports and subsequent procedures are outlined. Finally, recommendations are made to both countries and the relevant UN Committees.
Proudly powered by Weebly