Fipronil
June 25, 2018 Winnie Sorgdrager presented the investigation report on the Fipronil incident. Ms. Sorgdrager, former Minister of Justice, was asked by the Dutch government to lead a committee of investigation into the contamination of eggs by the biocide fipronil, its causes and the way the incident was handled. In 2017 the incident affected trade in eggs and consumer interests in several countries beyond the Netherlands. It affected animal welfare and famers’ livelihoods. I considered it an honour and a pleasure to support the work of the investigation commission as member of the advisory board.
The poultry sector faces huge challenges from red mite. This parasite affects animal health and welfare and causes considerable economic losses. No real solution seems to be available. A stable-cleaning company achieved successes by employing fipronil, a biocide not approved for this use. The use of fipronil caused contamination of eggs and poultry meat above MRL and of stables and manure. In the Summer of 2017 258 farms were sealed. The eggs were considered unfit for consumption and recalls were imposed.
The report is highly critical of all stakeholders involved including the owners of private quality schemes, the Netherlands’ food safety authority (NVWA) and ministries of public health and of agriculture. None of them gave sufficient priority to food safety.
Food business operators have the first responsibility to ensure the safety of the food they place on the market. Private certification schemes such as IKB-Ei (Integrated chain controls in the egg sector) provide important tools to live up to this responsibility. Already prior to the incident, IKB-Ei was assessed to be wanting with regard to food safety. According to the report the board of this quality system has shown a lack of ambition to make the scheme contribute as much as possible to ensure food safety.
Official controls in the egg sector are the joint responsibility of the NVWA, the Netherlands’ Control Authority for Eggs (NCAE) and – as far as organic eggs are concerned – Skal. These authorities operate under the responsibility of the ministry of health and of the ministry of agriculture. The system is complex, and communication was insufficient.
Initial indications regarding the unauthorised use of fipronil were lodged with the NVWA’s intelligence and investigation service (IOD) for possible criminal prosecution.
As a consequence of real and perceived restrictions criminal law imposes on sharing information regarding ongoing investigations, other departments of the NVWA could not get access to the information available to the IOD. While evidence was gathered, illegal activities were not put to an end.
The commission considers that food safety should be given top priority. It recommends improving self-regulatory systems. The current level of achievement of these systems does not justify a reduction in official controls.
Among public authorities, food safety information should be shared. Criminal prosecution should not interfere with measures to remove food safety risks form the market.

Producer Organisations
The ‘Study on Producer Organisations and their activities in the olive oil, beef and veal and arable crops sectors’ aims to deliver an analysis of producer organisations from these three sectors. The study was conducted by Ecorys and Wageningen Economic Research at the request of the European Commission Directorate-General for Competition.
The analysis is mainly based on a survey conducted for a representative sample of 203 POs and 23 APOs. The sampling of the surveyed organisations builds on an inventory of existing organisations in the 28 Member States.
The study reveals that there are many more non-recognised POs than recognised POs: there are estimated to be over five times as many non-recognised POs as there are recognised POs. The survey results confirm that producer organisations engaged in commercial activities also carry out other potentially “efficiency enhancing activities” (i.e. organisation of quality control, distribution and transport, input procurement, packaging, waste management etc.). The most important perceived benefits for the farmers include (i) market and price stability, (ii) reduced costs and economies of scale, (iii) higher price and ensuring a fair standard of living for the members and (iv) improved market access. The activities of producer organisations are widely perceived by survey respondents as contributing positively to CAP objectives. 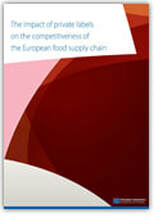 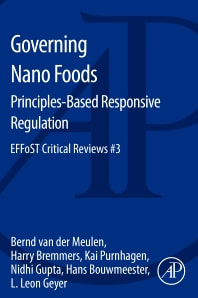 Regulating food applications of nanotechnology
At the request of FAO we prepared a background analysis for the NANOAGRI conference in São Pedro, Brazil. A further elaborated version of the report was published by EFFoST.
On the basis of comparative analysis, the reports presents the elements of a regulatory system capable of dealing with nanotechnology in the context of food safety. Rather than to come to nano-food specific regulation, the objective is to help test and improve existing regulatory infrastructures – or if need be to build new ones – such that they can ensure food safety in general in the face of the challenges posed by nanotechnology. The primary objective of the proposed regulatory system is to protect the health and safety of consumers of foods or food contact materials that are likely to contain substances obtained by nano-scale chemosynthesis or engineered nano-particles. The proposed structure chooses responsibility and liability of food businesses as underlying principle. The core of nano-food safety regulation is a premarket assessment requirement for food categories that include nano-foods.
The leading risk assessment authorities and the international community are called upon to come to understandings regarding cooperation and mutual recognition that ensure worldwide market access for approved nano-foods and protect businesses from the need to submit to multiple approval procedures.

Assessment of the Impacts of Non-Tariff Measures on the Competitiveness of the EU and Selected Trade Partners
Funded by the European Union, this report proposes a framework for analysis of requirements to control food safety and quality in international agri-food trade to facilitate a common understanding. It subsequently provides a comparison of requirements across countries. Taking the system of the EU as a starting point, regulatory elements in different areas of regulations are identified. The idea behind regulatory heterogeneity in the context of international agri-food trade as well as the construction of an index of regulatory heterogeneity is elaborated. The purpose of the heterogeneity index is to reveal differences in regulations, which can cause trade costs and consequently affect trade. Insights on regulatory similarities and dissimilarities between the EU and its trade partners point towards those areas where NTMs may be more effectively addressed and where trade opportunities could be improved or further explored, be it in multilateral or bilateral negotiations or on a case-by-case basis. 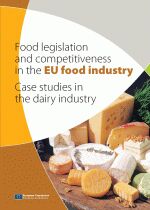 Food legislation and competitiveness in the EU food industry. Case studies in the dairy industry
From the project, undertaken at the request of the European Commission (DG Enterprise & Industry), three reports have been published.

Final Report
The final report addresses four important aspects of the competitiveness of the European food industry. First, the competitiveness of the dairy industry, as a subsector of the food industry, is studied in more detail, with a focus on innovation and business dynamics. Second, with the help of a survey, the administrative burdens in the dairy industry are studied in more detail.
Third, this study of administrative burdens is mirrored by a legal study on the relationship between food law and competitiveness. This includes four case studies, three in the Italian, French and Dutch dairy sectors and one on novel foods.
The fourth important aspect is the chain structure and the use of labelling. In the tender document that was the basis of this research project, the European Commission proposed several options for a food origin marking scheme. These are evaluated with an impact assessment against the background of the increasing market power of the retail sector and the importance of branding and private labels.

Reconciling food law to competitiveness
This study demonstrates shortcomings in EU food law that negatively affect the competitiveness of the EU food industry. Options for improvement are identified. A surprising finding is that many of the problems businesses experience from the regulatory environment are not caused by the law as such but by administrative practices falling short of complying with obligations on authorities such as the obligation to respect deadlines and to provide the reasoning underlying decisions.
Regulatory burdens can be eased by improving administrative practices and by living up to the ambition of ‘better regulation’. Private schemes may provide the food sector with opportunities to help itself cope with its regulatory environment, but then particular attention should be given to possible antitrust issues. The sector also needs more clarity as to the respective competence of EU institutions, the national authorities and possible private schemes. 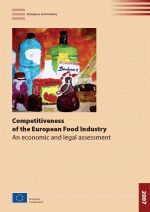 Competitiveness of the European Food Industry. An economic and legal assessment
This report has been written at the request of the European Commission (DG Enterprise & Industry). It is the first of a series of competitiveness studies for the European Commission. The competitiveness of the European food industry is weak compared to the US and Canada and at approximately the same level as the Australian and Brazilian industry. Scenarios show that unless the productivity growth in the EU is higher than in the rest of the world, EU competitiveness remains weak. Despite the weak competitive performance, a fair number of world leading food enterprises are located in the EU. Moreover the importance of the food industry in total manufacturing is growing, and the sub-sectors value added is higher than that of most other sub-sectors in manufacturing. The impact of food legislation does not seem to affect EU competitiveness negatively compared to the US. In general, EU companies’ view on the food legislation is positive. EU authorities can increase their support for the European industry by engaging in export negotiations. This study is one of the few or maybe even the first one, which include all subsectors of the food industry and benchmark these with important non-EU countries.
The legal part of the study shows that due to the implementation of the Commission White paper on Food Safety EU Food legislation developed to respond to growing concerns as regard food safety, consumer information and the functioning of the internal market. The study focuses on the impact of Food legislation on the industry in terms of current competitiveness and its potential to innovate (cost assessment and benchmarking).
Proudly powered by Weebly