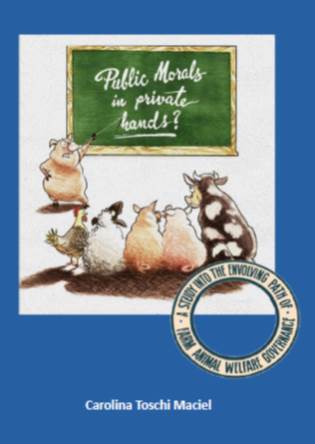 In 2015 Carolina Toschi Maciel defended her PhD thesis 'Public morals in private hands? A study into the evolving path of farm animal welfare governance'. The thesis was co-supervised by prof. Dr Arthur P.J. Mol and myself as promotors and Dr Bettina B. Bock as co-promotor.

​The advancement of regulatory instruments providing for farm animal welfare measures has been marked by various political and regulatory constraints in both domestic and international settings. In an attempt to overcome some of these constraints, a number of innovative governance arrangements have been developed, such as the use of private standards. This thesis offers a critical assessment on how and to what extent the policy field of farm animals welfare has been affected by these innovative developments.
The thesis consists of four independent (but inter-related) studies.  The first study sought to establish the extent to which the changes observed in Europe, specifically in the Netherlands, are consistent with political modernization theory. It study confirmed that the engagement of non-state actors in farm animal welfare policy-making in Europe corresponds to the modernization of governance practices, where a new collation of actors, policy discourses and rules come to the fore. The second study consisted of an empirical investigation of the rise of farm animal welfare governance in Brazil. The main objective of this study was to gain insight into the factors triggering policy change related to animal protection in developing countries. Data collected through 36 semi-structured interviews among different groups of Brazilian stakeholders suggested that the main factors leading to the rise of animal welfare governance in Brazil were related to Europe and the World Organisation for Animal Health (OIE). The insights gained from this study helped produce an analytical framework for assessing how farm animal welfare measures spread across jurisdictions. Accordingly, in the third study, an empirical and theoretical examination of animal welfare governance in the European Union-Brazil dyad is performed with the objective of assessing the actors and mechanisms in place to advance farm animal welfare in bilateral and international relations. The study found that initiatives based on policy diffusion mechanisms were the most prominent. The fourth study entailed a legal analysis of the relationship between the regulatory framework of the World Trade Organisation (WTO) and the advancement of animal welfare measures through private standards. The objective of this study was to determine the possibility that private standards fall within the scope of WTO Member States’ obligations listed in Article 13 of the Sanitary and Phytosanitary Agreement (SPS). The conclusion drawn from this examination is that convincing legal arguments and factual evidence exist to pursue WTO disputes over the use of private farm animal welfare standards.
The overall assessment of this thesis regarding the evolving path of farm animal welfare governance is four-fold. First, the policy field of farm animal welfare has significantly advanced in and between Europe and Brazil through a variety of non-legislative instruments, such as intergovernmental technical cooperation, capacity building programmes and private standards. Second, the political and regulatory implications of this research regarding the use of private standards in animal welfare indicate that a cautious approach to the use of this policy instrument is required. Third, the policy field of animal welfare has greatly benefited from the entry of the World Organisation for Animal Health (OIE), especially in engaging governments and industries in developing countries in this area. Finally, a reverse shift (that is, a shift away from private governance and towards public governance) is likely to occur as the path of farm animal welfare policy evolves internationally.

​The defence can be seen here.
Proudly powered by Weebly